* If you set the home time setting to a receivable city, you will receive stations tailored to the city. The time difference is set by the selected city.

After 35 years from the launch of the first model DW-5000C in 2018, based on the "exterior of exterior", "evolution of structure", and "evolution of module", we realized the full metallization of the case and mounted the Connected engine New model appeared from GMW-B5000.A lineup of two models, black and gold, with IP that realizes vivid color development on the case bezel that realized full metalization using hard stainless steel. This time, the case and the band were given a hairline process to maximize the feeling of luxury and calm metal. Moreover, it has a more chic finish by adopting a reverse liquid crystal.The base model GMW-B5000 has redefined the hollow structure, which is the core technology of G-SHOCK, and has developed an impact resistant structure. A fine resin shock absorber is sandwiched between the metal bezel and the main case to develop a new impact resistant structure that can withstand even full metal cases. High impact resistance TROGAMID® (Trogamide®) is used for the most shocked band attachment, reducing the impact on the band attachment pipe. Moreover, the screw back case with a profound feeling is adopted, and the DLC processing which is excellent in abrasion resistance is given to the back lid. We are pursuing the improvement of the visibility using STN-LCD (Liquid Crystal), which also adheres to clear visibility and the film solar cell and STN-LCD (liquid crystal) whose time display is easy to read even from oblique angles.While equipped with the advanced engine, keep the size by high density mounting technology. Inheriting a design with a perfection, we have evolved the exterior and modules.In terms of functions, it pursues accurate time accuracy, and is equipped with Bluetooth® communication function and multi band 6 corresponding to standard radio waves of 6 stations in the world. By linking with the dedicated application G-SHOCK Connected * 1, accurate time information is acquired from a time server on the Internet. In the area corresponding to the standard radio waves of 6 stations in the world, it has radio wave reception function that corrects the time automatically and acquires the correct time. In addition, it is tough solar with Casio's original power saving technology, enables stable driving, and has practical features such as high brightness full auto LED backlight and world time. In addition, it is also possible to localize by displaying the day of the week * 2 in 6 languages. Performed orthodox evolution in pursuit of a global basic that can display accurate time all over the world.The concept inherited from the first generation is as it is, the quality of the watch is pursued, and the exterior, structure, and module evolution are polished, and it is the appearance of GMW-B5000GD finished with a full metal case.※ 1 Application for exclusive use of G-SHOCK smartphone link model. In conjunction with a smartphone, time setting such as automatic time correction, world time, etc. is connected with the "Connected engine" that supports Bluetooth® connection, and the latest time zone and the time reflecting the summer time information is displayed all over the world. Tough Solar is installed to realize a solar powered function with heavy load.

I know. All gmw-b5000 are made in japan. But i wanted jf ver. And, finally ..
I Bought it for my Bday present.
Best price.
Delivered on time.
Customer service response good. 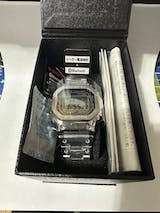 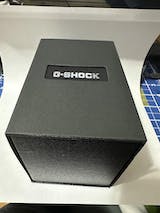 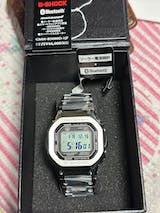 Full metal squares are some of the coolest watches ever made. They combine some of the best features of the casio lines like atomic timekeeping, Bluetooth syncing, solar etc, with a rock solid case that feels like a tank. This particular series also comes with the much beloved STN display which allows for viewing at any angle. I particularly like the look and proportions of the watch. It’s not overly large like many modern watches, and the general look matches the retro-yet-futuristic stylings of the original resin model. All in all, the watch I received was authentic and in pristine condition. For the listed amount, you won’t find a better deal out there. Shipping was also prompt and I received the watch in something like 48 hours after ordering which is mind boggling considering that it ships from Japan. Great seller and product. Highly recommended.

Added to your cart: